You are here: Home1 / All Articles2 / Artistic Techniques3 / In the foreground4 / Vermeer – The Seventeenth Century in Holland

Vermeer Girl with a Pearl Earring

Drawing
by brush with light ocher in linseed oil.

Monochrome
executed with light layers of dark color consisting of lead white and burnt lacquer combined with boiled linseed oil.
The underlying drawing is visible through the monochrome.

Varnish
based on natural resins. 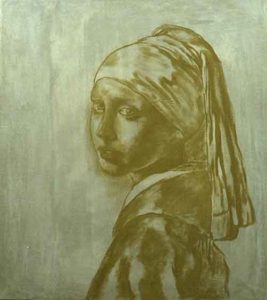 Gloss of color, relief of light parts and transparency of shadows painted on a bright primer are the distinctive features of Flemish painting. During the Seventeenth Century, however, the painters gave up the bright preparation, partially modifying the operational procedures (and the recipes collected by De Mayerne confirm this trend). Unfortunately, Vermeer did not leave any writings and the sources do not speak of his working method: fortunately, recent scientific investigations have revealed some of his secrets.
The artist constructs the painting by successive overlapping of tones: like many Dutch artists, however, he varies his technique based on the theme or in order to suggest the different qualities of the matter represented in his painting. The deep knowledge of the optical characteristics of light and the representation of light effects such as certain shaded and colored outlines, also lead us to think that he used a darkroom as an aid for the composition of his paintings. 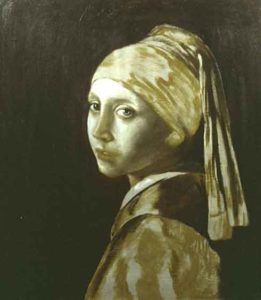 The artist used almost exclusively the canvas as a support; the color of the preparatory layers, on the other hand, varied from painting to painting, with gradations from light gray to dark brown. In the “Girl with a Pearl Earring” the preparation is obtained with a mixture of gypsum, animal glue and linseed oil, on which lead white, black and small quantities of red and brown ocher are added, until a cold gray tone is obtained which has a great influence on the final tone of the painting. Vermeer, like Caravaggio, did not develop the composition through separate studies but drew directly on the canvas: X-ray investigations have also revealed the vanishing point hole used to construct the composition in many paintings. Although not easy to detect, it is then almost certain that the painter made the drawing on the preparation using light ocher. Unfortunately, both infrared and x-ray examinations are unable to detect the presence of a drawing made with this pigment on a lead white preparation. 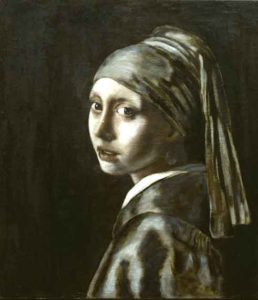 Once the drawing was completed, Vermeer painted the monochrome sketch with extreme accuracy using lead white and ivory black pigments.
The dark background of the examined work was painted with a mixture of ivory black and burnt umber. The light and dark parts of the composition are clearly indicated. The strongest highlights are painted with pure white and the brush strokes are noticeable. The contours of the shapes are not clear-cut and allow the primer to still be partially visible. This monochrome sketch has a decisive influence on the final tone of the painting as the subsequent layers are of limited thickness and maintain a certain transparency. 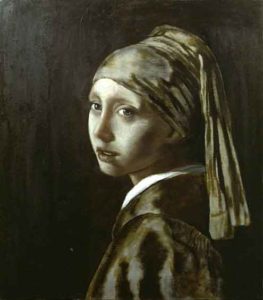 Before moving on to the drafting of the final layers of paint, Vermeer would continue to work on the monochrome sketch with some basic colors. In the painting we examined the shadows of the face, for example, contain reds and browns while, on the left of the nose, the presence of red ocher, red lacquer and vermilion was found. The strongest lights are also treated with pure lead white at this stage. These layers are used by the artist very ingeniously: in the finished painting we find some areas covered by a simple glaze, others, in order to obtain particular effects of light and shadow, are partially left in view. In some cases, Vermeer even mixes sand with the mixture in order to obtain a grainy background surface. The deepest shadows of the face and clothes are sketched with black and earths and subsequently modeled with ocher. 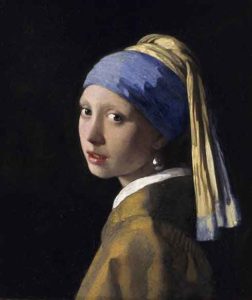 We do not know for sure if the artist waited for these layers to dry completely before completing the work: often the painter still preferred to paint on the fresh paint using the underlying layer of color to model the shapes. Certainly, where glaze was to be applied, drying was a necessary condition. Part of the final layers of paint were applied on the sketch in very thick layers (impasto), almost covering it, other parts were completed with thin transparent glazes. It is interesting to observe the attention that the painter paid to the material rendering: besides the addition of sand, different degrees of grinding of the same pigment were used and soft and fine brushes alternated with thick and rigid brushes. Vermeer also used patters or lumps of color to enhance the surface effects. To paint the turban and jacket of the “Girl with a Pearl Earring” he used the wet-on-wet technique. The small yellow reflections are then obtained with an almost pointillistic technique. 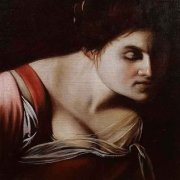 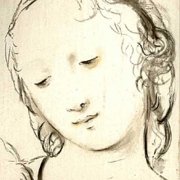 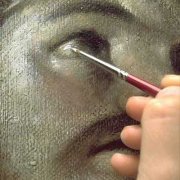