You are here: Home1 / All Articles2 / Restoration3 / Varnishing 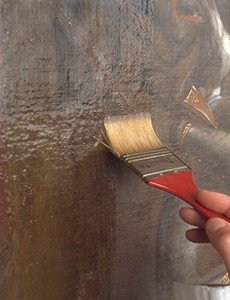 Applying varnish on a painting using a brush

Brush varnishing
The application of the final varnish on the restored painting serves to protect the colors from external agents and to improve the optical characteristics of the object by giving it the necessary amount of shine. In addition, this finishing treatment re-proposes an old and traditional intervention that is well documented in the literary sources. We know that there were artists themselves who were concerned with the conservation of their works over time. Giovan Battista Armenini, as early as 1587, wrote about varnishes and their function “to liven and to bring out the colors, and over time keep them beautiful and vivacious.” Almost three centuries later, in 1857, Delacroix stressed: “it would be necessary for the varnishes to be a type of armor for the painting and at the same time a means by which they can stand out”. 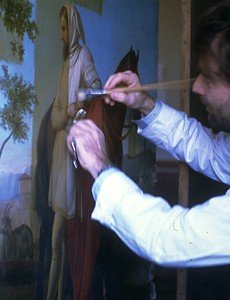 Thinning of an old tarnished varnish

Thinning of an old tarnished varnish
Over time, varnishes lose both their protective quality as well as their optical qualities. This fact makes it necessary to substitute the varnish (an intervention carried out with the maximum respect for any original varnishes: see patina). Today, in order to render future varnish interventions easier, we use “solvent” varnishes; that is, varnishes made up of an organic, volatile solvent that does not affect the pictorial layers, and a natural resin (mastic resin or damar), or, a synthetic varnish chosen on the basis of it the qualities mentioned above and that remains easily reversible over time. 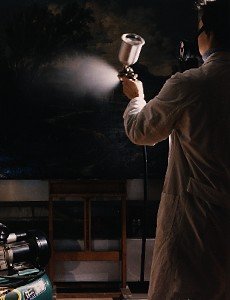 Spray varnishing of a painting

Spray varnishing
The varnish film should be thin and homogeneous. It can be applied with a brush or by a compressed spray. The final effect (that is, more or less surface gloss) can be controlled by varying the dilution and temperature of the varnish, the volatility of the solvent and for spray varnish, the spray compression and spraying distance from the painting. 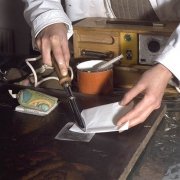 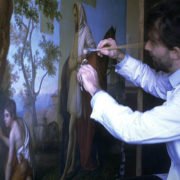 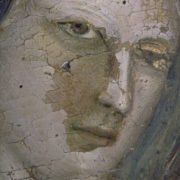 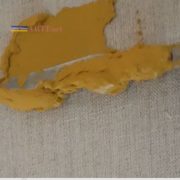 Removal of overpaint
Scroll to top