By material documentation (or material history) of an object of art we mean the study and interpretation of the documents obtained thanks to the investigations carried out with the scientific means available today combined with the contribution provided by an in-depth interpretation of the ancient sources on artistic techniques . (Manfredi Faldi, La documentazione materiale come supporto e verifica dell’analisi storico-stilistica nelle opere pittoriche, Firenze 2003, p. 3)

The search for the material history of an object of art is the goal of what is currently called Technical Art History, a relatively young research involving art historians, restorers and scientists which is also oriented towards other disciplines such as economic and social history, anthropology and aesthetics. The interdisciplinary character of “technical art history” combines a variety of skills in a global research approach that concerns the creative process from idea to work of art, in every culture, place and historical moment. Erma Hermens, Technical Art History: A Synergy of Art, Conservation and Science, Brill Leiden & Boston 2012 PDF

Study of the sources

The study of the sources concerns the study of all those manuscript, printed, figurative, iconographic, oral texts from which useful information is obtained to reconstruct the history of an artifact. (C. Giannini, R. Roani, Dizionario del restauro e della diagnostica, Firenze, Nardini 2000, p. 75)

The study of the creative path, as well as the examination of the pictorial material, takes place through direct dialogue with the work, comparison with the sources and data provided by the technical analysis [1].

In fact, the direct dialogue with the work of art requires, “in order to reach its maximum fullness, the knowledge of the techniques and materials that produced it and the discovery of the link between the material and structural data and the formal and intellectual process of the artist” [2].

The interest in sources on artistic techniques, as also underlined by Michele Cordaro, is certainly not very developed in Italy. In the best consideration, the study of artistic techniques is “relegated as a highly specialized commitment that contributes little or nothing to the most precise and high methodological definition of ‘Art History’ [3]“. For today we must report the accurate studies that have been made on the subject by Silvia Bordini, Roberto Panichi, Cinzia Profeti and Gianni Carlo Sciolla [4], from which we have drawn the data collected here where it was not possible for us to directly consult the specific source.

The fine introductory essay by Silvia Bordini for the presentation of her study on treatises concerning techniques deserves to be mentioned.

The author, in fact, with lucidity and clarity manages to demonstrate how the language of artistic technique can today be thought of as a real interpretative code after having exercised for a long time the “function of normative and operative instrument” [5].

The study of the sources on painting techniques, far from being a pure list and description of the materials and methodologies used over time by the artists, offers in fact a precise and irreplaceable competence that allows “an opinion on the work in its complexity ” to be formulated. The problem, in fact, “is not only that of identifying materials and procedures, but that, inseparable from them, of studying them critically in order to identify general meanings and particular moments, to arrive at formulating a judgment on the work in the complexity and irreducible uniqueness of its components, combining the observation of the historical-artistic gaze with the acuteness of laboratory analysis” [6].

The sources on painting techniques offer irreplaceable information on the pictorial material and its possible alterability, that is, they are unique documents for the reconstruction of a real history of technical and pictorial means. The norms and methodological precepts attested in the treatises, or the information provided to us on the artistic procedures recommended and promoted by the individual authors, crossing with the history of the taste of a particular historical moment are in fact fundamental for a correct and complete artistic analysis.

To approach the techniques of painting and try to understand the relationship between materials and image, technique and figuration, often conceived in ways that are very different from what we are used to, we have the guidance of some treatises. As regards the Thirteenth and Fourteenth Centuries, two treatises are of fundamental help: the Schedula diversarium artium by the monk known as Theophilus and The Book of the Art by Cennino Cennini. 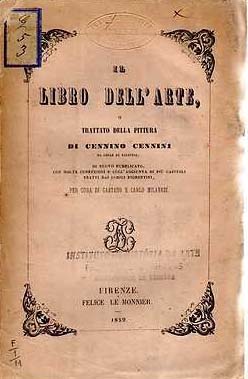 The first treatise was presumably written in Germany in the first half of the Twelfth Century, “in one of those monastic workshops which were already being replaced by the building sites of the cathedrals as the driving force of figurative activity; it is a text linked to the great event European Romanesque, and an irreplaceable guide to understand the painting even from a purely stylistic point of view” [7].The other treatise is the all too well known Book of the Art [8] by Cennino Cennini, written in vulgar by the Tuscan painter, transferred to Padua, between the last years of the Fourteenth Century and the first years of the Fifteenth Century.

Alessandro Conti highlights the most reliable origin of the treaties of the time, noting that they were certainly not written “by whoever was at the head of an active shop” since more commonly the “recipe books were born in the margin of writing, among those who did not see in the ways of preparing ink and colors a professional secret but only the means to transmit a text, and they could disclose it without jealousy of vocation. In fact, no master “if he had ever found the time to distract himself from work and devote himself to a series of precepts of the art, would have entrusted written prescriptions of things that were partly secret (procedures that he did not want to disclose as they were entrusted with peculiarities linked to the success of their works)” [9].

These documents, as well as the treaties of subsequent eras, offer precise information on the type of artistic material used, thus inscribing themselves in the history of technical and pictorial mediums, they provide us with precise data and advice on the alterability of the material used, on techniques, on the history procedures followed by individual artists. The sources also instruct us on religious iconography, provide important data for the reconstruction of the aesthetic taste of a specific historical period. It also seems important to note the variety that distinguishes the narrative form of these treatises. From the simple and sometimes boring list of expenses and simple prescriptions, in fact, we pass to a more enjoyable narration that we can almost define literary whenever the treatise is articulated on the structure of dialogue, a real literary genre capable of facilitating and streamlining the discussion.

Furthermore, the art treatise was not always and exclusively the work of a single writer but, on the contrary, it became, as in the case of the Sloane 2052 manuscript [10], a real miscellaneous work thanks to the direct collaboration of individual artists who willingly cooperated in dissemination of technical knowledge by offering useful and specific clarifications on their pictorial technique. The sources are enriched with autographs, recipes, notes and epistles which were faithfully attached and sometimes commented on by the writer of the manuscript itself.

As Silvia Bordini affirms, the treatises concerning techniques “tackle the problem of forming and transmitting a technical-artistic culture. Linked to doing, manual activity and experience, technique has always had an operational character, but it has also been equipped with a theoretical depth, speculative values ​​and a specific language, variously related to historically emerging trends in the field of art theories and art criticism” [11].

The analytical and diagnostic investigation techniques applicable to works of art in order to obtain information on their executive procedures and state of conservation.

Collects and interprets the documents obtained from artistic diagnostics.

Also takes into account the contribution provided by the interpretation of treaties on artistic techniques.

Retracing the stages of the process of a painting verifies the validity of the hypotheses developed thanks to the results of the material documentation.