You are here: Home1 / All Articles2 / Diagnostics3 / Ultraviolet fluorescence 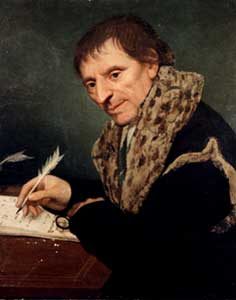 Among the examination methods for paintings, ultraviolet fluorescence (UV) is certainly one of the most useful and often used. The technique is used principally for the analysis of the deterioration conditions of the work, and in particular, in the verification of the existence and the magnitude of those areas that may not be part of the original image. It is not always easy to identify visually what is original on the painted surface and what has been added at a later point in time. 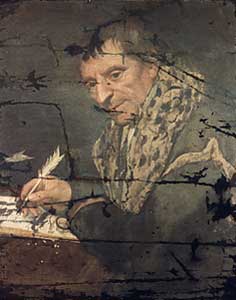 By projecting a UV band of light on the surface of the painting we can observe how some of the areas become illuminated while others remain dark. This factor is due to the physical phenomenon of ultraviolet fluorescence in the visible field. That is, the property of some substances to glow when they are hit with UV rays. The UV rays are invisible to us, but when they are absorbed by certain substances they are reflected as visible light. The difference in luminosity (fluorescence) can be seen on a painting “lit up” by a UV light only in function of the chemical composition of the various substances that make up the varnish and the pictorial layers. This fluorescence varies however based on the amount of time that has passed since the materials were applied. With this examination it is often easy to differentiate retouching from the original painting: the overlying materials that are not as old show up as being darker. 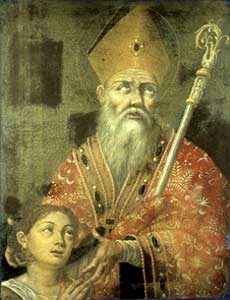 Nevertheless, difficulties in identifying old restoration interventions in UV fluorescence are encountered – not only in those cases when a short period of time has elapsed between interventions and the original manufacture – but also because of the strong fluorescence that is often taken on by varnishes over the paint layer. The greater the fluorescence of the top layer, the less fluorescent is the underlying paint layer. In addition, lacunae in old varnish layers, especially when they are in areas corresponding to dark colours, appear dark and not fluorescence although they are original. These areas can be seen as very dark spots and are often very difficult to distinguish from overpainting. It is therefore necessary to use this examination together with other investigative techniques that can confirm or deny these initial observations. 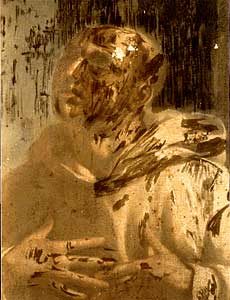 An obvious case that necessitates the use of more than one type of examination is during the cleaning phase, when the conservator-restorer is confronted with the problem of removing previous restoration interventions. Even if initial examinations can show us what has been added to the surface of the work, we can not yet determine how much under the old intervention is still original. In the past in fact, restoration was aimed at fixing up damaged areas. Vast areas of the painting were covered with new layers of colour only because they were situated close to the missing lacunae. 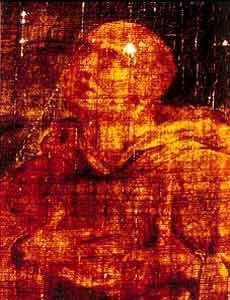 The removal of overpainting can obviously be justified only if it disturbs, changes, takes away or hides part of the work. This would be the case where a previous restoration goes over the edges of the actual lacunae. The example we show, using UV fluorescence and with a technique called transmitted light can be important in establishing if the added paint covers part of the original, or, if the underlying lacuna is of the same dimensions and therefore corresponds correctly to the intervention in question. 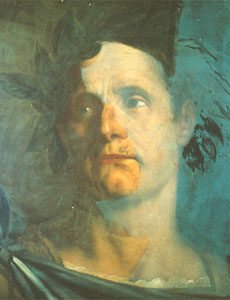 Ultraviolet fluorescence In the verification of the various layers of varnish, UV fluorescence proves to be one of the most important examinations. Varnishes composed of different substances – natural resins, glues, oils or other organic substances such as egg white (often used as a protective layer on wood panel) – can be seen and allow us to not only identify their presence, but also the amount of overlapping, and if they are more or less homogeneous.

A lesser homogeneity can be due to an irregular application, but can also be caused by differentiated removal interventions. 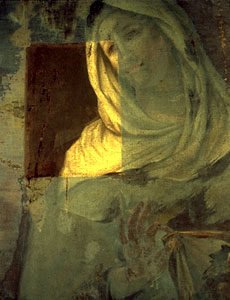 During the cleaning of a painting, the repeated verification of the process using a black light can assist in observing the progress of the work. It can be used for checking the level of homogeneity of the varnish when gradually reducing its thickness, the presence of a second varnish, an underlying varnish layer, and it can point up spots of glue or other materials left from previous interventions.

Even if in certain cases the fluorescence of the varnishes can impede the observation of underlying layers, this should not be considered a limitation, but part of the information gathered from the examination itself. 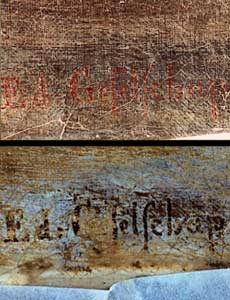 Ultraviolet fluorescence cannot be considered in itself a conclusive method for determining the age of a painting. This is because many materials develop a strong fluorescence before even completely dry. In addition, there are methods of accelerating the deterioration process of the painting, and, in a short period of time can render the pictorial layers yellowed and fluorescent. An old painting that does not demonstrate any fluorescence under a black light should nevertheless make us suspicious. It is necessary to closely check to see if this is due to layers of dirt, pigments or other coloured materials imbedded in the varnish and that prevent the penetration of the ultraviolet radiation. In this case, thinning out the varnish layer can help to judge the fluorescence of the underlying painting.
Even signatures and dates should be carefully observed under UV fluorescence because any modification, change or addition can become evident. 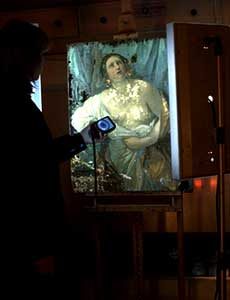 A visual examination should be completed by photographic documentation. It is necessary to combine direct observation – which is only temporary – with permanent documents. Photographs permit a comparison with other investigative procedures. In addition, the photograph under UV radiation is quite useful because it accumulates light for the entire length of the exposure. It is therefore possible with a longer exposition to “add up” the impressions on the film. Instead, even when viewed for a long time our eyes do not see any more than what was seen at first. The luminosity of the fluorescence is generally very weak, and therefore the photograph often reveals details that the eye does not see.
The most common type of light source used for this examination – both for visual and for photograph purposes – are fluorescent tubes or mercury-vapour lamps with nickel oxide filters (black light) 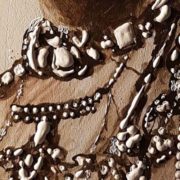 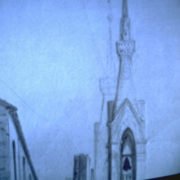 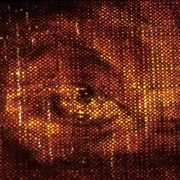