You are here: Home1 / Drawing

Light and support of our arts

For the study of the creative path, that is of the tools and procedures that the artist used to create the work, of primary importance is an in-depth analysis of the original graphic layout, that is to say of the subsurface drawing.

“The drawing is the light and support of our arts”. With these words Giovan Battista Armenini (1586) re-proposed a judgment that Cennino Cennini and Giorgio Vasari had already strongly emphasized, indicating drawing both as the fundamental exercise through which the apprentice was trained to become a painter, and as a moment in which the painter concretized the idea that would become a finished work.
Well before becoming a form of autonomous artistic expression, drawing was therefore a preliminary phase of the artistic pictorial process, foreseeing, within it, further and specific moments of deepening of the original idea.

The sketch therefore represents a first exercise, a first thought, in the form of an image made up of a few summary and indeterminate strokes. Giorgio Vasari, in 1568, speaks of it precisely as “a first sort of drawings, which are made to find the attitudes and the first composition of the work … And because from the fury of the creator they are quickly with pen or other drawing means or charcoal expressed only to tempt the soul of what comes to him, therefore they are called sketches “.

With the term “profile” Giorgio Vasari himself also indicates an already subsequent moment, in which the outline of the figure, from vague, becomes precise and fixed.

Through gradual and progressive passages, we then reach the actual preparatory drawing in which each element of the composition is evaluated as an element in itself and in relation to the whole. According to Giorgio Vasari, the drawing now takes into account the contours, the light, the depths and an initial evaluation of the colors, present as watercolor retouching. 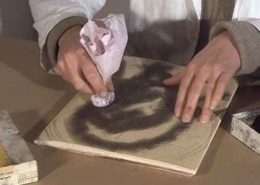 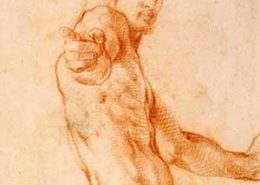 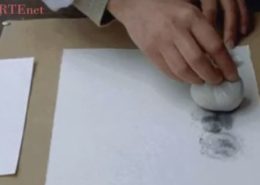 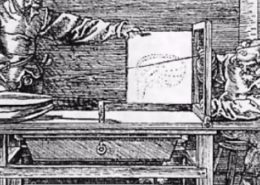 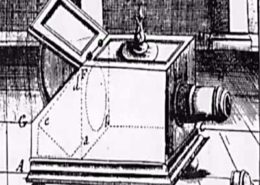 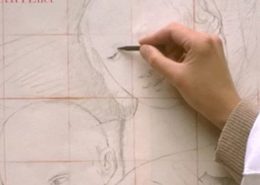 Subsurface drawings are sometimes visible to the naked eye, particularly on thin-material or unfinished paintings. The current detection and documentation of many drawings has now become possible through the use of the infrared technique, in particular of infrared reflectography which, as mentioned, was developed for application on paintings by J. R. J. van Asperen de Boer in the early 1970s.The most substantial body of published information on subsurface drawings is associated with paintings from the Renaissance period [1]. This is because the drawing on the primitive painted panels is more easily detected due to the painting technique: commonly a carbon black drawing on a light gypsum and glue preparation, covered with fine layers of paint (figs. 54-55).

From the 16th Century certain artists began to use a gray under-modelling that obscured the underlying design, the paint layers became more opaque and the color of the preparation began to change [2]. The purpose and function of the subsurface drawing also changed considerably with the introduction of the independent oil sketch [3], which, having originated in Venice after the mid-Sixteenth Century, became common in the Seventeenth Century. In fact, subsurface drawings have not been found either on paintings by Seventeenth-Century artists, such as Rubens, van Dyck, Caravaggio or Jan van Goyen, nor in Eighteenth-Century ones such as Wattau, nor in Nineteenth-Century works such as those of Ingres . It is presumed that many artists made some kind of preliminary sketch on their canvases even if their detection with current techniques is not always possible and therefore further investigations would be necessary.

The transfer of the drawing

As regards the realization of the preparatory drawing, today we know that in many cases this was done separately in order to be transferred once completed on the support before receiving the paint.

Inestimable heritage of the ancient bottegas (workshops), the drawings accumulated over time or made specifically for a new painting had in any case to be transferred on the support intended for painting, using tracing and enlargement methods so as not to allow errors. This therefore also made it possible to avoid retracing the creative process and consequently guaranteeing fidelity to the master’s model, especially in the case in which the work of aids was used.

Pouncing is another of the most ancient techniques that served to bring back, without variations in scale, a drawing made on paper on a new support. The design was heavily pierced along each single contour with an “agugella”, that is a metal rod with a tip similar to that of a needle.

Placing the perforated sheet on the new support, the holes were beaten with a wide-weave cloth bag containing carbon dust, so that the position of each single hole was imprinted on the support. The drawing could then easily be retraced and strengthened with ink applied with a brush (figs. 56-57). The traces left by the dust were then eliminated by dusting the surface with a bunch of feathers.

Obviously the procedure involved the loss of the model, soiled by coal. This inconvenience could be solved by placing a double sheet of paper when the lines were punctured, in order to obtain a duplicate and keep the original for further use.

Retracing, moreover, has been one of the most popular techniques for transferring a drawing to a new support without any variations in scale. Already used in the Thirteenth-Fourteenth Century workshops, the system is well attested throughout the Renaissance, with methods similar to those that today regulate the use of carbon paper. The technique involved blackening the side of the sheet on which the drawing to be transferred was made more or less homogeneously with coal dust. Then the drawing was placed on the new support and eventually fixed temporarily to prevent it from moving during the operation. At this point, very simply, the contours of the design were traced with a stylus, so that a dark trace could be deposited on the new support in correspondence with the pressure lines. After having traced the engravings delimiting the gilding and the main architectural elements as usual, the painter went over the drawing in charcoal with ink applied with a brush with aqueous binder, or with carbon black in egg tempera.

In the event that the transfer of a drawing were to be accompanied by a change of scale, the painter resorted to squaring the original, in order to break down the composition into single regular portions more easily reproducible.

Having squared the support on a scale higher or lower than the model, the individual portions were then carried over, having specific references or only purely indicative ones according to the width of the determined grid. If, on the other hand, for some reason the original was not to be dirtied with the squaring, a frame with a grid made up of cords could be superimposed on the image.

The deep layers of painting

Equally important for the study of the creative path is the investigation of the deep layers of painting, that is, the layers richer in coloring material. Their examination makes use primarily of X-ray radiographic techniques and stratigraphic analyzes carried out on samples taken from the works in question.

Thanks to the radiographic examination, as the radiologist Ludovico Mucchi acutely points out, the painting is almost divided into two distinct parts: “a deep layer, rich in coloring material” which is the most clearly detectable by X-rays and “a superficial layer, consisting of poorly colored brushstrokes that do not give visible signs or give little evident ones “. The radiographic examination allows us to identify the deepest pictorial part, always painted with clear and confident lines as the most spontaneous and personal part of the process, “the painter has no hesitation or restraints and in making the painting his hand follows a specific and constant creative rhythm: gestures that become a stroke and the stroke that becomes painting “. In the finishing work of the painting, on the other hand, the painter changes his brushstroke more or less consciously conditioned “by the uses of his time by the pictorial current dictated by this or that master and finally also by the will of the client (…), all these considerations explain the large number of paintings made by different hands which, while stylistically similar on the surface, diverge in the deep structure, the one highlighted by the X-ray examination.

But there is also another aspect that underlines the importance of the radiographic characteristics of the deep layer: while the pictorial surface is the one that undergoes the greatest wear over time, and is therefore the one most tampered with by restorers, the deep layer, more protected and consistent, is much more resistant to the insults of time. If the criterion is accepted that the painting, due to wear and tear, remains a film so small as to leave only some radiographic traces, it must be admitted that the multiple restoration interventions can also considerably betray the original work” [4].

This term indicates products of different complexity, characteristics and purposes. Generally speaking, the drawing can be identified with a figuration in which the image is obtained with a more or less complex trace on a surface that constitutes the background. The media used and, obviously, the techniques, can serve as additional elements to define and delimit the genre: excluding the periods prior to its diffusion in the West, it is in fact the paper that has generally been chosen as the surface on which to outline the image with the use of a stylus or pencil, or with pen and brushes dipped in plant and mineral inks.

The use of color is extremely limited and, in any case, excludes the use of large background painting areas, keeping the color offered by the support for the background.
Thus Filippo Baldinucci (1681) explains: drawing. An apparent demonstration with lines of those things, which the man with his soul had before conceived and imagined as an idea; to which the hand, with long practice, practices the effect of making these things disappear.