You are here: Home1 / All Articles2 / Deterioration3 / Color alterations 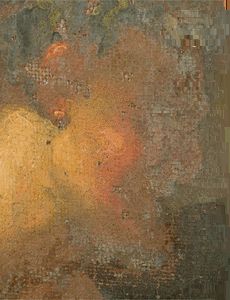 Oxidation of the varnish

The primary function of the final layer of varnish is to protect the painting against external agents as well as modify the optical characteristics of the pictorial surface, thereby influencing the final appearance. Any alteration in the varnish layer will therefore reflect upon both the aesthetics and the conservation of the work.
As the material ages it loses flexibility and transparency: the varnish film becomes darker, harder and fragile. In consequence it cannot block the penetration of external particles and substances. In general, the colors lose their depth and contrast; the painting takes on a brownish-yellow tonality. The tiny cracks in the varnish film, the gradual yellowing and loss of transparency are a result both of oxidation and photo-chemical processes as well as mechanical tension. 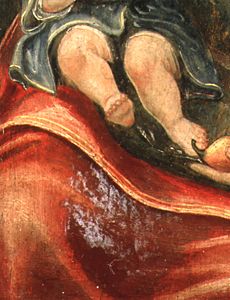 An alteration that is not as serious as the preceding one – and one that does not require the partial removal and substitution of the varnish – is the so-called “bloom” effect. It can often be removed by rubbing the surface with a chamois cloth. The term bloom refers to the effect of whitening on a varnished surface in environments with high levels of relative humidity. Initially, the phenomenon appears to be a bluish cloud. This appearance is due to the dispersion of light rays on the tiny water droplets trapped in the varnish layer by condensation. Mastic varnish (see mastic resin) easily lends itself to bloom, while with damar varnish the tendency to bloom appears to be less. 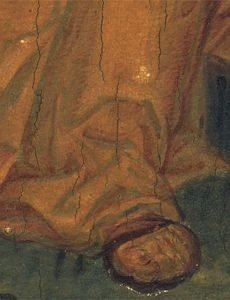 Chemical alteration of the pigment

The presence of a uniform and well-preserved varnish layer slows the deterioration processes that normally effect the pigments in the pictorial layers. Each individual pigment particle is surrounded by the binding medium. The nature and condition of the binder slow down the alterations due to light, air and pollutants. These factors, together with humidity, tend to modify the composition and the properties of each single pigment. Color alterations are in fact due to chemical or photochemical phenomena. Some pigments – particularly those that contain organic substances such as rose madder or Indian yellow – are unstable in light. Therefore, under violet and ultra violet wavelengths they tend to fade. Other pigments having an inorganic origin, such as verdigris, tend to darken when exposed to light. 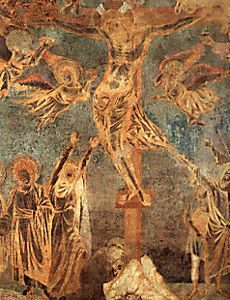 Others types of pigment alteration can occur in contact with air and pollution. For example, the blackening of lead white and lead red, which in combination with oxygen are subject to oxidation. This phenomenon is most often found in wall paintings where the pigments are less protected by the binding medium and where humidity can increase the action of pollutants. In addition to putting the pollutants in solution, the humidity works as a vehicle to put these substances in contact with the work. 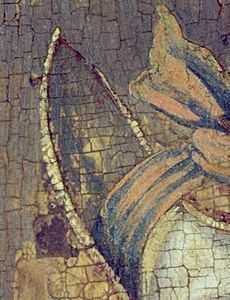 The last type of chromatic alterations in pigments is caused by chemical reactions (especially oxidation) brought on by other materials that are associated or in contact with the pigments. For example, another pigment, the binder, the filler used in the preparation of the colors, a substance added during a restoration, etc. Natural ultramarine blue tends to turn grey in contact with white lead.
Other pigments are effected by lime and therefore can not be used in fresco painting. On the other hand, there are other pigments that quickly change when used with an oil binder. For example, smalt has usually not been used in oil painting because it decomposes and releases soluble cobalt that provokes intense oxidation of the oil. 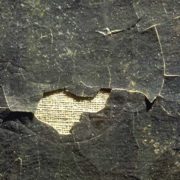