Thirteenth and fourteenth century paintings show a significant continuity in the techniques and materials used: wood support, gesso and animal glue ground preparation, tempera and gilding can be observed over a long period.
The primary source of information about the techniques used during this period is Il Libro dell’Arte by Cennino Cennini, a painter in the tradition of Giotto. In this text, one can readily see the advances that the thirteenth century made over earlier centuries, when colour was applied by uniformly filling in with fields of colour in a substantially graphic manner. We will follow Cennini’s text and attempt to demonstrate some of the choices that the painters of the time would have made in working on wood panel. Particular attention will be given to the methods used in the transfer of the drawing and in the gilding. 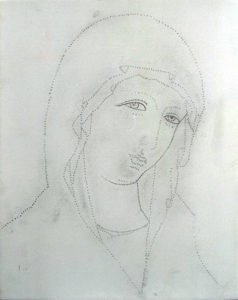 Cennini teaches his reader how to choose the wood, join the panels together, cover over the joins with strips of linen cloth (impannatura) and how to prepare the panel for painting by creating a ground layer made up of seven or eight coats of gesso and glue, which then must be brought to the whiteness and smoothness of ivory (ground preparation). Great importance is given to the preparatory drawing, executed with charcoal and reinforced with ink.
Another system used during this period, and especially widespread in the early Renaissance, is pouncing. This technique consists of using a drawing paper whose outlines are pricked with an awl, in such a way that the design or drawing may be transferred to the prepared panel by passing coloured powder such as carbon black through the holes. 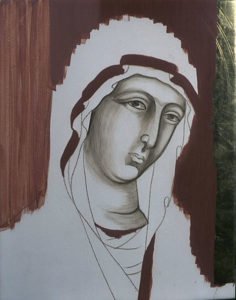 Once the figure was complete and its forms had been shaded with a light watercolour wash, the outlines were incised with a sharp stylus in order to identify the areas to be painted and those that were to be gilded.
In the latter, gold foil (a very thin leaf made by the gold beater) was applied over a ground of red bole (Armenian bole) and then polished or burnished with and animal tooth (burnisher). 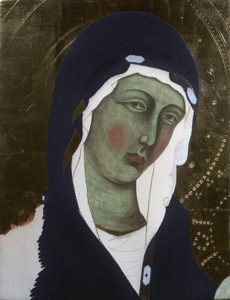 At this point, the colouring in of the wood panel was started, and as Cennini advises, preferably beginning with the robes of the figures and the architectural elements; that is with the background elements. The colours were prepared in small vessels in gradations going from dark to light. They were bound with egg yolk and applied to the surface of the panel using small brushstrokes which fused together to create a chiaroscuro. “…start to apply the dark colour, shaping up the folds…And in the usual way take the middle colour and lay in the backs and the reliefs of the dark folds. Then take the light colour, and lay in the reliefs and the backs of the light part of the figure. And in this way go back once again to the first dark folds of the figure with the dark colour. And carry on as you began, with these colours, over and over again, first one and then the other.”
On the gilt surface the various decorative elements were executed (haloes and background). A series of punches was used to press small motifs into the gilt surface, and which were repeated according to a precise design. 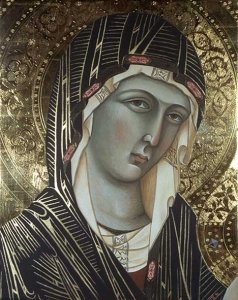 The rendering of flesh tones required a semi-transparent, dull green background made with terre-vert and white lead through which the underlying chiaroscuro drawing could still be seen.
Once the drawing had been reinforced with this green verdaccio, a reddish-pink tone (vermilion and white lead) was applied to the cheeks and the lips. Flesh tones were created by first hatching (tratteggio) from the light tones toward the dark, and then blending the various shades, always taking care to allow “the green, which lies under the flesh colours, always show through a little”. 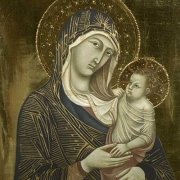 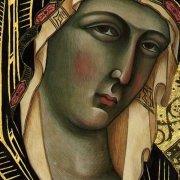 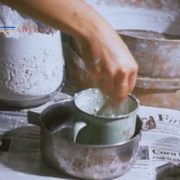 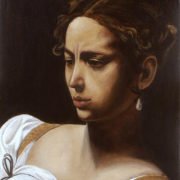